My regular readers know that I believe all phenomena, including thought construction are both implicit and explicit. My word implicit means information that we all know is real [such as consciousness] but which at the same time it cannot be tested. This is the reason why I have classified metaphysical phenomena such as consciousness as being indivisible information. We can describe indivisible information like consciousness, but physics science generally cannot incorporate consciousness in its modelling. This is because consciousness cannot be defined or measured. I think this is a shame because this means that science models do not seriously incorporate our whole of life experiences, which also means reality.

I recently read an article written by George F. R. Ellis, who talks about this same dilemma in science and I feel you should be aware of Ellis’s ideas as I strongly identify with them. Below you will find the conclusions of Ellis’s essay entitled “On the Nature of Emergent Reality”. I have emboldened sections of the conclusion from the document that I feel  are most pertinent to my argument and you might like to know about them as well. If you have the opportunity to read much of Ellis’s ideas about reality I think that you will feel richly rewarded.

Reprise: I have given above a view of emergent complex systems where there are structuring relations, triggering relations as well as environmental influences and internal variables, summarised in Figure 9.

Figure 9: The system and its situation: contextual and triggering influences 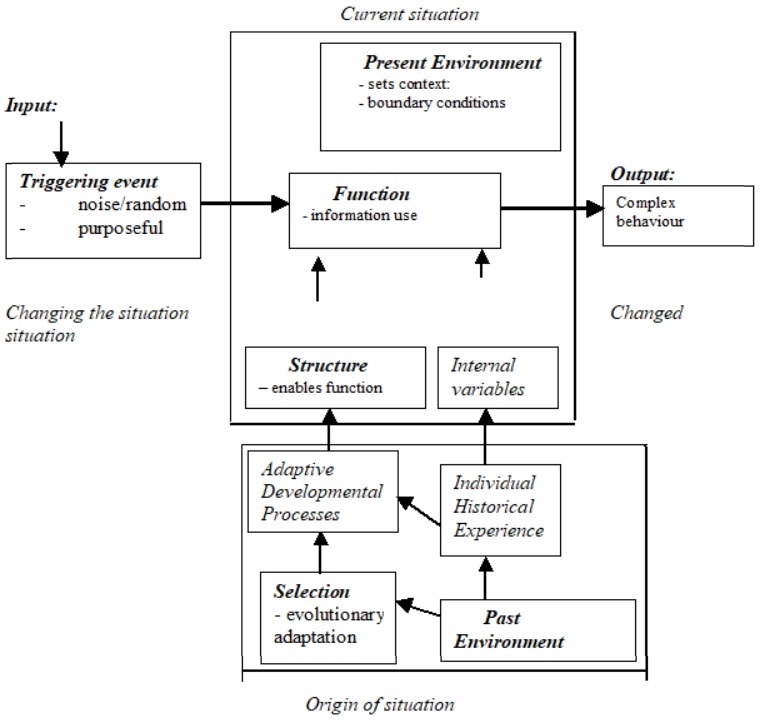 Function takes place in the context of a social and physical situation that, together with the values of internal variables, is the current operating environment. Structure is constant on the relevant timescale, enabling the input (triggering events that operate in the given situation – they are varying causal quantities) to have a predictable result. Thus function follows structure. The environment sets the boundary conditions and the internal variables (memory and learnt behaviour patterns) result from past experience. Noise or chance represents the effects of detailed features that we do not know because they are subsumed in the coarse graining leading to higher level descriptions of either the system or the environment. The system structure is determined by developmental processes that use genetic information, read in the context of the system-environment interaction occurring in the organism’s history,  to determine its structure. For example, genes develop a brain capacity to learn language that then results in adaptation of the brain to that specific language. The genetic heritage leading to this result is comes into being through evolutionary adaptation over very long timescales to the past environment. This language then forms the basis of complex symbolic modelling and associated understanding, taking place in a social context,  that guides future actions. Thus human understanding of events and their meanings govern their actions, which then change the situation around them. Symbolic systems are causally effective.

Strong reductionist claims, usually characterised by the phrase `nothing but’ and focusing only on physical existence, simply do not take into account the depth of causation in the real world as indicated above, and the inability of physics on its own to comprehend these interactions and effects.  These claims represent a typical fundamentalist position, claiming a partial truth (based on some subset of causation) to be the whole truth and ignoring the overall rich causal matrix while usually focusing on purely physical elements of causation. They do not and cannot be an adequate basis of explanation or understanding in the real world. Consequently they do not represent an adequate basis for making ontological claims.

This paper has outlined a view of emergent reality in which it is clear that non-physical quantities such as information and goals can have physical effect in the world of particles and forces, and hence must be recognised as having a real existence (Ellis 2003). Associated with this there is a richer ontology than simple physicalism, which omits important causal agencies from its vision. That view does not deal adequately with the real world…”