This is in respect to my Awareness model and how it might compare with Bohm’s Holomovement model of physics.

I have developed a concept theory in relationship to reality. I have entitled this theory the Awareness model. The Bohm model of physics relates to the existence of an implicate and explicate phenomena (information)  being present within our 3D universe. In my Awareness model I refer to such information as being implicit and explicit information. Both models are mathematically and physically much the same except that my ideas relate to my opinion of there being a wider matrix of informational reality wherein our 3D universe ‘sits’. The Bohm Holomovement hypothesis is that space-time reality is one with an implicate [curtain-like] backdrop and unlike my Awareness model it makes no apparent attempt to include what thing/s might have existed before the Big Bang.

I have included an article into this blog entitled “Non-commutative Geometry, the Bohm Interpretation and the Mind-Matter Relationship”. It was written by Professor Hiley and is already cited above. The contents scientifically relate to similar themes that I have loosely discussed above. It is an extensive scholarly article that I feel has been primarily written for the benefit of Hiley’s peer’s. It is not easy to read. The online source of the essay can be found here.

I have copied and pasted certain extracts from Hiley’s essay and they appear below. I will not attempt to explain each quote. My reason for posting these quotes today is that I feel that you need to know that such informed work exists in the community relating to the interconnecting linkages between mind, brain, consciousness and matter processes.

As a Concept-Scientist I do not fully understand the scientific meaning of some of the contents of the essay. However, I believe that Hiley is saying something is seriously wrong with contemporary science modelling as it attempts to understand the fundamental relationship between minds, brains, consciousnesses and matter. Hiley seems to be offering a solution to this scientific dilemma and his solution is based upon the ideas of the late physicist David Bohm. I am presently developing ideas for a new blog relating to this topic.

Quotations as cited above: 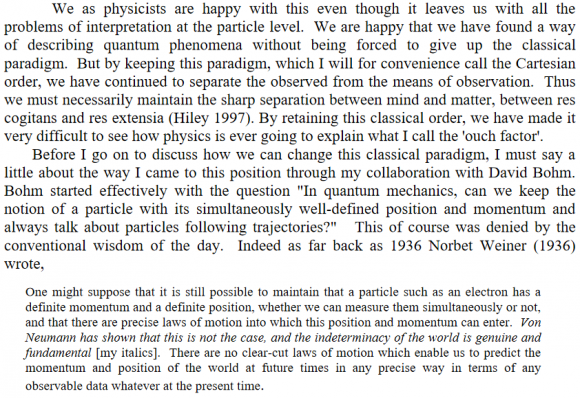 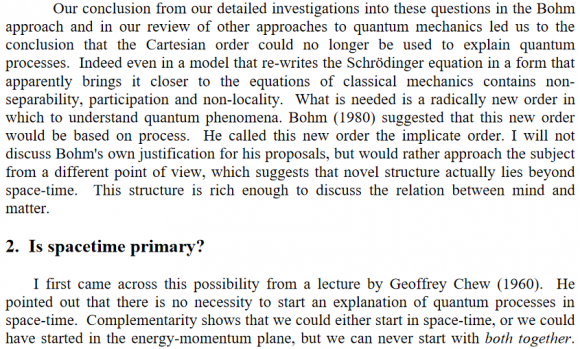